Need and Ability to Organize Self

Cellular networks have seen continuous growth in size and complexity over the last few years. This growth can be attributed to multiple factors; the explosion of content being delivered via the internet, the explosion of social media, the growing expectations from cellular networks, and so on.. The consequence of this increasing awareness and need is a sharp pressure on capacity. Such has been the growth rate that the mobile networks have absorbed a disruptive change in technology every 10 to 15 years and kept on making money.

This need of growth has catalyzed the technical advancement, which in turn has created further awareness to increase the consumer interest and need manifold. This explosive growth of networks bring forth the need of managing them , of keeping the entire network in a coherent, stable state while maximizing performance ñ the task that can only be achieved by enabling this mammoth of network to teach how to take care of itself ñ thus giving rise of self organizing networks. HSC has been working on Self-optimizing networks since 2009 in various guises.

While SON started out as a very specific acronym (our first experience of SON was in the Wireless LAN space), it has now grown to be very broad term. The term ëself organizingí now covers multiple aspects related to needs of configuration/ optimization/ recovery/ healing etc. SON promises to provide a solution for multitude of ëbig-concerní items such as: coverage and capacity optimization, Interference reduction,

Automatic neighbor relation, mobility optimization, load balancing etc. As we delve further in SON, the foundation of these solutions is the ability of network to understand (measure and analyze) its own state and take appropriate action to rectify/improve the situation ñ and this process has to happen continuously and dynamically while adapting to the new state of the network and the users of the network. With that background we can say that the critical components to any SON solution are:

Next generation SON solutions can target multiple parameters for optimization. These can range from spectrum usage (actual bps per Hz of spectrum per sq.km of coverage), energy consumption (network), Quality of Service, user battery life (especially important with modern power-hungry data-hungry smart-phones) and many other factors. When the word SON is used commercially, it typically means a particular instance of SON focusing on one or a few of these parameters.

As mentioned above, HSC has worked for some 5-6 years in various areas of SON. Of the last two years, we have consciously tried to put these piecemeal efforts into a common framework with a common understanding of the different modes of optimization and how they interact with and impact each other. In our viewpoint, SON can also be viewed as a layered domain, with three large components.

HSC has interests in various sub-domains of SON, spanning both the network optimization and the traffic engineering domains. We will discuss these subsequently. 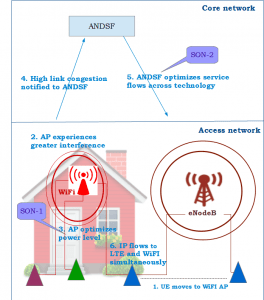 Some Sub-Domains of Network Optimization

The Problem of Power Management

Power management as a global optimization problem is well-established. Older radio networks used large reuse distances and static network planning to convert the global interference problem documented in (Gupta, 2000) to a set of easier to solve localized problems. However, even this proved very difficult in UMTS (for example)(Gunnarsson, 2003). Since then, advances in cellular networks have seen the widespread deployment of MIMO, single-frequency networks, tight reuse factors due to spectrum shortage and ad-hoc/intermittent network nodes (small-cells) has brought back focus to the global interference management system

Power Optimization for 802.11 based Ad-Hoc Networks

HSC has an engineered a solution for optimizing the transmission power of the OFDM based FDD network nodes in a n ad-hoc network; while we have demonstrated it in a WLAN network, it is conceptually deployable in an LTE based hetnet as well. The key-differentiation of our solution is in the fact that that it is fully distributed. The optimization function is executed at each AP independently ñ there is no need for a central control of optimization. Each node is equipped to measure the interference experienced by its active users. Based on the measurements and its past state information, each AP individually adjusts its own transmission power. The distributed power optimization algorithm is based on the same idea as TCPís network congestion algorithm; both of them are after all trying to solve the ëshouting in a crowded roomí problem. TCP uses packet drops as signals for congestion; in contrast, the dynamic power optimization problem uses interference measurements.

The solution adapts itself with the change in perceived congestion and dynamically adjusts the power. The optimizing nodes are fair to addition/ withdrawal of optimizing neighbors in the system. This solution exhibited clear power saving advantage at node level as well as overall system level. A second generation of the algorithm is now under design, based on stochastic optimization principles.

A second key aspect of network optimization is the management of user perceived QoS. It should be noted that QoS management is a function distributed at different levels of a wireless network. There are QoS related functions at the physical layer (HARQ and ARQ), at the media access level (different bearer classes and corresponding handling requirements) and at the higher layers (bearer/session setup and admission control, congestion control, etc.) Different air interfaces have different way of handling these; 802.11e/WMM for example uses different contention and sleep mode parameters for handling of specific traffic classes, whereas 3gPP mandates QoS management on a bearer level, with corresponding flow-down of BER and access handling at the physical and MAC layers. However, if we go above the level of the individual network node, we come to the problem of inter-working; between two network nodes, between multiple network nodes, and eventually between different networks. In our view, different networks not only co-exist to take over load and coverage; they can also separate different classes of traffic and service them appropriately. For example, in cellular-iRAT scenarios, a GSM and LTE network can coexist, with voice calls being directed to the GSM network (circuit switched fall-back) and data calls being directed to LTE.

While load balancing in the form of network directed handovers is not particularly novel, the recent introduction of Hotspot and IFOM allows us to implement this at the level of individual flows, as opposed to entire UEs. This means that we can make an offload network available exclusively for specific types of traffic, advertise it to UEs over GAS and other protocols and then have the UEs automatically switch over specific kinds of traffic to the new network. By doing this at the flow level, the network operator maintains fine-grained control over network traffic and can deploy specific networks for suited to specific traffic types.

HSC has developed solutions around Passpoint, Hotspot 2.0 and IFOM for WLAN-WLAN and WLAN-cellular coexistence features, where different networks exist to cater to different levels of service. For example, in a carrier-WiFi environment, the operator could deploy multiple networks, one of which is reserved for guaranteed QoS traffic (on subscriber or traffic flow level). In order for this to work seamlessly, the user equipment would have to be made automatically aware of the presence of this network and allowed to redirect itself (or the appropriate flows) to the network, with automatic authentication and charging. In order to do all this seamlessly, HSC has used the features of Passpoint (authentication), GAS/ANQP (network advertising) and IFOM (for flow level redirection of traffic).

The strength of IFOM is the fact that a single UE can simultaneously access multiple networks, and hence, use both QoS-controlled and general purpose networks simultaneously. In the HSC solution, the rules for flow-level QoS optimization are centrally monitored and configured to ensure multi vendor, multi network commitments are honored. At the ground level, optimizing nodes (eNBs/APs ) measure the key parameters, analyze the local interference situation and pass it on to a central server; this then dynamically provides access network information to UEs using signaling mechanisms newly developed for Hotspot. An individual UE can then actually split its data traffic at the IP level and simultaneously use multiple networks for multiple IP flows. A key new network component is the ANDSF server, which monitors network state and sets the routing policy for traffic; this has been developed by HSC as part of this solution. Self-Optimizing Networks are an exploding technical domain with a very large number of use cases. Each access network has its own key parameters which are the subject of optimization. Hence, SON is becoming a collection of technologies for network optimization, based on a common framework for measurement, signaling and action. Each access network will deploy specific SON applications built over a common framework.