Role Of Technology In The Government & Public Sector Undertakings

Technology has become a critical facilitator for today’s businesses. It has a highly profound role in driving optimization and efficiency across all sectors today, including the public and private sectors. CIOs from Government & PSU’s have adopted niche technologies to drive innovation and transformation within the country. Tech-adoption is seen as an investment in keeping the country competitive in an ever-evolving global economy.

Reliance on progressive technologies such as blockchain, artificial intelligence, robotics, augmented reality, and machine learning has helped drive sustained growth within the public sector. This constant strive via automation, and the digitalization of services has led to significant social, economic, technological, & environmental outcomes. 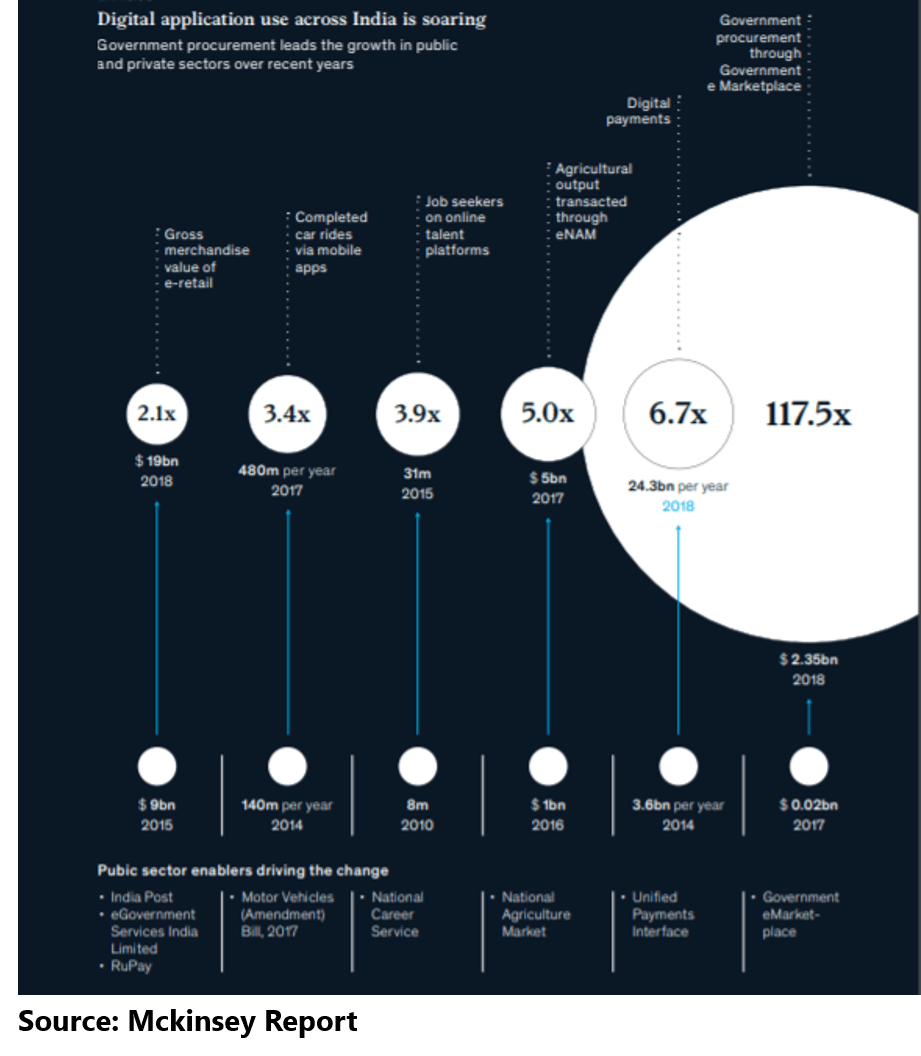 According to a report by MEITY, India has the ability to create up to $1 trillion of economic value from the digital economy by 2025, with half of the opportunity originating in new digital ecosystems that can spring up in diverse sectors of the economy. The potential five-fold increase in economic value from India’s digital transformation by 2025 would create a rapidly growing market for a host of digital services, platforms, applications, content, and solutions.

Few technologies that have been rapidly adopted by the GOI and Public Sector industries today for facilitating the Digital Economy are as follows: Governments and PSUs can harness citizen’s data and behavior based on interactions with agencies and digital websites. The data thus obtained can be analyzed through the use of AI and analytics techniques. The intelligence collected can offer personalized public services to citizens, derive actionable insights, and help them predict future trends.

Enterprises and governments across the world have recognized blockchain’s potential. More than forty nations have taken initiatives to implement blockchains within their economies and develop a robust, & holistic blockchain ecosystem. Blockchain 3.0, the current version of the blockchain, provides interoperability, scalability, and security vis-a-vis its older versions. More than 50% of the Indian states have initiated blockchain projects (pilot stage) to provide better customer services.

Cloud computing has immensely transformed the way IT is consumed and managed, resulting in higher and improved cost efficiencies, a faster time-to-market, and enhanced scalability of applications-on-demand. Virtualization (NFV and SDN) has served as a significant driver of cloud deployment across all sectors. Using Cloud Computing, even small to medium public sector organizations within local communities, have driven innovation in ways that would not have been possible if they were to rely entirely on their own resources.

Amidst the COVID-19 pandemic, both the Government and public sector organizations, have adopted surveillance technologies to track the movement of their employees. Cellphones are playing a critical role in the fight against the spread of the coronavirus. The Indian Government, on April 6, launched the Aarogya Setu app for contact-tracing.

State governments and PSUs are also using geo-fencing technology to ensure quarantine for the ones suspected with infection. It helps create a virtual geographic boundary, alerting officials if a particular mobile device leaves a designated area.

Digital twins are poised to innovate and transform the way PSUs perform predictive maintenance of products and machinery within their manufacturing units. Sectors involving capital-intensive assets and processes such as energy, utilities, and manufacturing are pioneering digital twin use cases globally.

They can also contribute towards optimizing supply chains, distribution, and fulfillment operations. In the private sector, the FMCG giant Unilever has launched a digital twin project that aims to create virtual models of dozens of its factories.

The public sector has been a strong catalyst for India’s rapid digitization. Digital technologies can contribute significant value towards areas such as online transactions, government subsidy transfers, and procurement to enhance efficiency and productivity in Government and public-sector units. The National and state governments can drive digitization through a partnership with the private sector and placing technology at the core of their operations. Benefits of Cloud Computing in Retail