Mobile Edge Computing is an evolution in computer architecture, whereby computing power can be moved to the edge of the system, to where the eyes and ears of the system are active (Hu, 2015). Primarily used in the context of mobile cellular networks, it portends a network of mobiles, supported by a network of computing nodes, tethered close to the mobile and equipped with the ability to off-load computation needs from the mobile over high-bandwidth, low-latency wireless links (Mao, 2017). It has been argued that MEC is a natural corollary of the cloudification of software development; the tendency of software developers to expect the scalability and on-demand resource deployment of the cloud as part of the platform(Dinh, 2013)(Othman, 2013). MEC extends this to the mobile application development arena, by providing an equivalent mobile cloud

In this article, we shall take a closer look at what makes MEC a challenge to design and deploy and further, what benefits it is likely to bring to the end-user.

The deployment of MEC is represented in Figure 1. As we can see, we have computing nodes in very close proximity to the gNodeB (5G term for the base-station) which can run applications; it is presumed that applications are instantiated and controlled by counterparts corresponding to individual mobile applications, consuming data generated by one or more mobile users. An oft-cited example is that of VR based immersive games, whereby the MEC cloud off-loads expensive computational work from the end-user device, hence allowing a richer game experience. However, for this to work, the following questions come automatically to mind. Not all of these questions have definitive answers at this point in time. However, we can start off by taking a look at the infrastructure in terms of what an application requires and see how these needs can be fulfilled.

The architecture of the mobile cloud

The physical hardware of the mobile cloud consists of a large number of individual compute nodes or clusters of nodes spread through the network, preferably close to the gNodeB so as to minimize latency(Alex Reznik, 2018). The compute nodes would be sufficiently generic so as to allow applications to run on them. This could be achieved by providing a standardized environment (such as Android provides on mobile phones or AWS EC2 provides for cloud-based applications) on which applications could be hosted, or a standardized tool-kit for building such applications. Seeing that many of these applications could be fairly compute-intensive, a mix of CPU + GPU resources may be required. MEC applications and the SOA network

The selling point of the cloud was instant scalability. The selling point of the mobile application was location-specific sensory data. The selling point of the mobile cloud thus has to include components of both; spatial awareness and “follow me” capability, instant deployment across the cellular network and a “view” of the network. The canonical definition document provided by ETSI (ETSI MEC Leadership Team, 2016) identifies and acknowledges these requirements and in turn, provides the architectural scaffolding necessary to support these. The key changes in the cellular network identified in this document are as follows: An intriguing new architecture would be the merger of the emerging cloud RAN and MEC onto a single set of computing infrastructure as shown in Figure 2. This view leverages the gradual migration of signal processing abilities to the standard computing platforms (for example, introduction of Advance Vector Processing instruction set to the Intel x86 platform) and the increasing cost-effectiveness of GPU based platforms as a general purpose computing engine, especially for the newer technologies such as neuromorphic computation. Just as Amazon EC2 started out because Amazon put together a large amount of computing power and wanted to monetize the surplus, MEC could be achieved by monetizing spare cycles in the cloud-RAN platform.

The mobile phone and MEC

One of the aspects of wide-spread deployment of MEC will be its impact on the mobile end-user device as an end-user computing device. The modern mobile phone is a marvel of engineering, combining a panoply of sensors, display devices, cameras with multi-core and multi-purpose computing and media cores in a tight, power-constrained package. However, mobile applications are still limited by considerations of memory footprint, CPU availability, and power. Using MEC, mobile platforms can outsource much of the heavy computing task to MEC hosts as available and hence, conserve power.

Crucially, the deployment of MEC shall also allow the development of new mobile end-points with a vast range in terms of cost, energy availability and sensors. MEC based applications can run equally when instantiated from a low-power IoT end-point, a tightly energy-constrained drone-based platform or a mobile device. An MEC based application can further unify all of these into a single, collaborative network-application for solving complex problems in real-time.

A sample use case for MEC 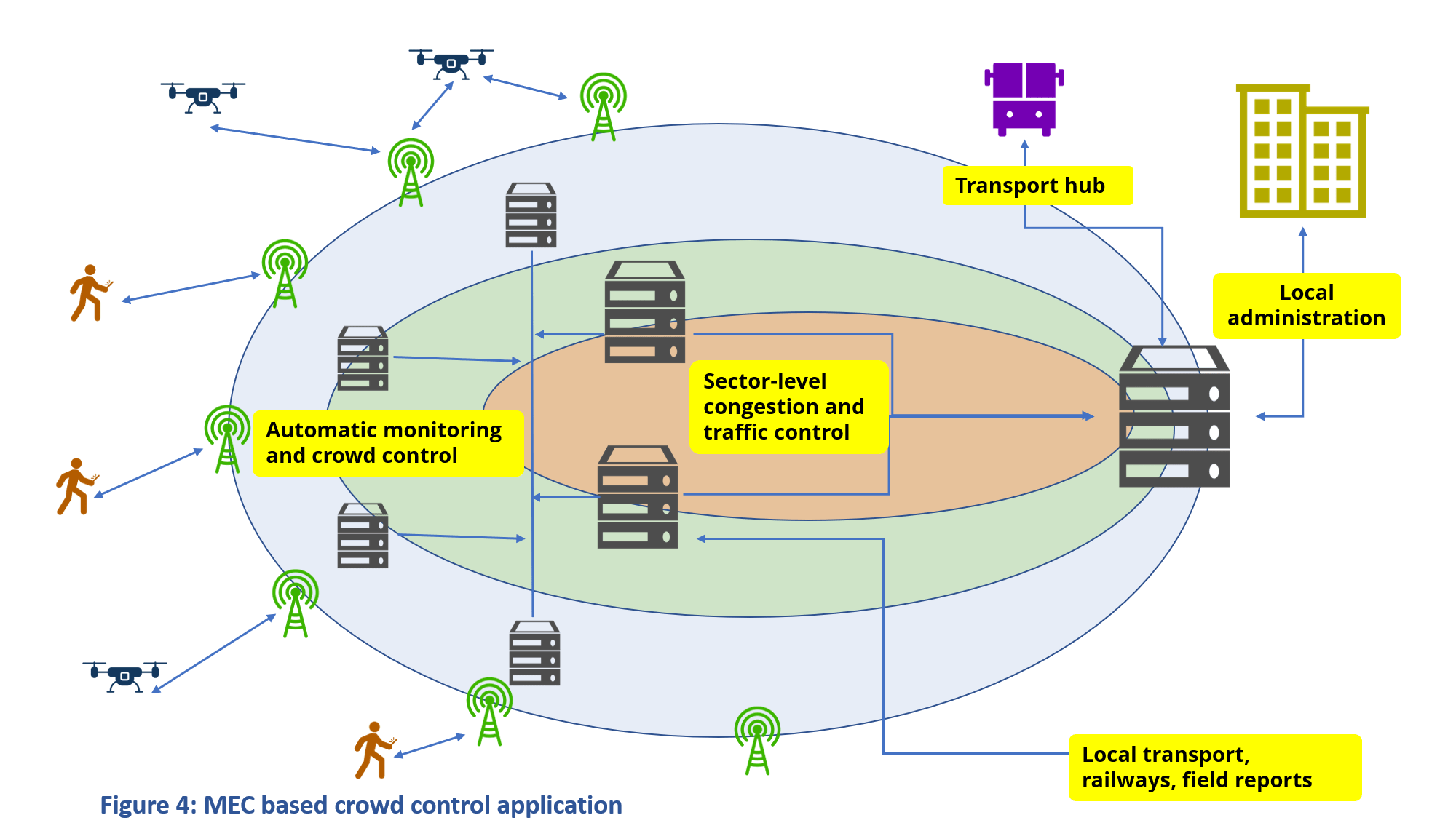 The combination of these three requires a transformation of the core network; not a mere addition and deletion of functions, but a fundamental re-creation, as can be seen in Figure 3>.
Instead of defining the core network as the telescoping of packet processing functions, (i.e., a sequence of gateways), the network is defined, rather, as a conglomeration of semi-autonomous modules that provide services to each other.

It is anticipated that the deployment of MEC will allow brand new applications in industrial control, safe transportation, and e-governance. A classic case for this kind of application is in crowd-control. Consider the case of the Kumbh Mela; the last iteration in 2019 saw 150 million people congregate over the duration of a month in a small town of 500 000 people; by far the largest peaceful gathering in the history of the world (the Rio Olympics, in contrast, only hosted 500 000 visitors). The daily gathering on some specific days was estimated at 10 million over a 5 km waterfront. Sophisticated crowd-control is required to ensure that the people get to the appropriate locations in time; this includes end-to-end monitoring from the transportation hubs (railway stations, bus-terminus, designated car-parking, etc.) to the temporary accommodations (a dedicated tent-city is set up for overnight visitors) and finally, the actual banks of the river where the worship and rituals take place.

An MEC based application as shown in Figure 4 would integrate back-end information systems and front-end real-time monitoring (drones, mounted cameras, volunteers and security personnel) and smart-lighting and signs to direct crowds. Deploying the application close to the edge provides an adequate amount of responsiveness and adaptability, whereas the network itself offers easy integration with back-end information systems, police/security monitoring systems, etc. Other applications of this nature include security monitoring, waste monitoring, and pollution control.