With the advent of IP capable smart devices e.g. mobile phones, tablets etc. and easy internet access, there has been an exponential growth in data traffic. Cellular network operators have been trying to cope up with this ‘tsunami’ of data traffic by adopting new technological innovations like LTE. But it’s pretty much clear that Shannon’s channel capacity will hold true in the end and cellular network shall create a bottle neck against this rise in data demand. Also, as the cellular spectrum is a scare resource and is licensed, allocating more spectrums to meet data demands won’t be a business viable solution either.

This is where WiFi (WLAN) networks come to the rescue of network operators. Idea is to offload, on-the-fly, some or all of the data traffic from cellular network e.g. GSM, LTE etc. to Wi-Fi network. This should happen in a seam-less fashion so that: (a) subscriber is not required to intervene, say for authentication; (b) data traffic should not stop when this handover happens

Following factors augment the choice of Wi-Fi as an alternate technology for offloading cellular data traffic:

Thus Wi-Fi becomes an obvious choice for network operators. It can help improve cellular coverage and increase capacity through spectrum reuse in areas where most of the data traffic is being generated e.g. in a building. Thus cellular network shall be used for high QoS intensive traffic as well as mobility requirements e.g. VOIP, where as Wi-Fi shall be used for low QoS data traffic e.g. downloads, web surfing etc.

Advances in 802.11 and 3Gpp have provided mechanisms for operators to deploy a mixed network of LTE nodes and WiFi access points, connected to a common core. 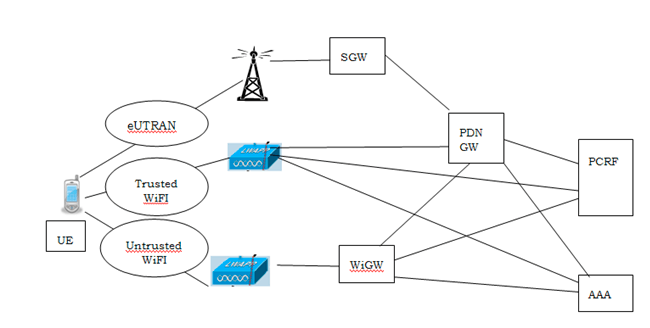 The approach discussed so far provides a mechanism for seamless handover between WiFi and LTE networks; however it imposes the restriction of using either of the two networks at a point of time.

IP Flow Mobility (IFOM) enhances the capability further by allowing simultaneous connection to both WiFi and LTE network (in fact, any macro cellular network with a packet bearer) – with simultaneous IP flows over the two accesses. IFOM is being defined as part of Rel 12 of 3GPP. The key step in the evolution to IFOM is to completely separate the flow management from the access network; once IFOM is deployed, any macro network, starting from Greenfield LTE to Wifi to GPRS. The entire intelligence of simultaneous attachment to different networks and the mapping of flows to individual networks is at the endpoint, in keeping with standard 3gPP goals. In order to support this, the terminal IP stack will have to be upgraded to DSMIP (Dual Stack Mobile IP), which is a new IETF standard [RFC 5555]. On the network side, the home agent will also have to support the equivalent DSMIP. The IFOM architecture will be a radical departure from LIPA/SIPTO and other standard forms of offloading; there is no ‘break out’ point within the access network, where the IP data is separated. Instead, the terminal itself splits data traffic appropriately. Data offloading techniques like LIPA/SIPTO reduces traffic loads on cellular core networks by introducing L-GWs (local gateways), whereas offloading techniques likes WiFi offload/IFOM reduces traffic loads on cellular access networks by utilizing WiFi as a new radio access network (RAN) to existing cellular core networks. As access network is the main source of bottlenecks to cellular networks, IFOM/WiFi Offload technique shall be more effective a solution to alleviate the problem of cellular traffic loads thereby improving user experiences