Instead of using one key, asymmetric key cryptography or public-key cryptography (PKC) uses a key pair. One of the keys of this key pair is called the public key. The public key can be known to everyone and is used to encrypt the information. Another key of the key pair is called the private key. The private key is kept secret and used for decryption. Asymmetric key cryptography allows anyone holding the public key to encrypt the information. However, only the person with the secret private key can decrypt it. Digital signatures schemes (DSA), end-to-end E-Mail encryptions (OpenPGP), secure transport layer protocol (SSL), and many other security protocols use Asymmetric key cryptography. Some asymmetric key cryptography algorithms are RSA, Diffie-Hellman, and ECC.
Public and Private Keys used in PKC algorithms are mathematically related, which means that the security of PKC hinges on the difficulty of solving complex mathematical problems to derive one key from another. All PKC algorithms depend on the complexity of solving complicated mathematical problems using conventional computers. Some of these complex problems used in cryptography are prime factorization of large numbers or solving discrete logarithm problems. One of the most popular and widely used cryptographic algorithms, RSA, is based on prime factorization. Diffie-Hellman and ECC algorithms depend on solving discrete logarithm problems.
PKC algorithms with a decent key size are considered secure for conventional computers. It is not possible or is very time/resource-consuming for classical computers to be able to solve the mathematical problems that form the basis of these PKC algorithms. All this will change with the advent of quantum computing.

Noted physicist Feynman conceptualized the idea of using the effects of quantum mechanics in a computer. In contrast to bits of the conventional computer that can take 0 or 1 values, fundamental blocks of quantum computer qubits can exist in 0, 1, or simultaneously in both states. Phenomena of qubits entanglement result in a tremendous increase in the possibility of parallel processing. An n-qubit quantum computer can process 2n operations in parallel. Several companies have been working on building quantum computers. IBM Quantum System One is a 27-qubit computer, and Intel has 49 qubit processors; however, Quantum computers are so far not available for wide usage.
Quantum computers threaten cryptographic algorithms because they can perform many times more parallel operations than conventional computers. Quantum computers can break PKC by solving complex mathematical problems or break symmetric key cryptography by exhaustively searching for all possible secret keys.

How Quantum Computers are a Threat to Cryptography?

Mathematician Peter Shor published a Quantum computers algorithm for large integer prime factorization and discrete logarithm problems. Shor’s algorithm makes it possible to break widely used RSA, Diffie-Hellman, and ECC algorithms using quantum computers. Shor’s algorithm would require a 1000-qubit computer to break 160-bit ECC and a 2000-qubit computer to break 1024-bit RSA. Quantum computers with this kind of processing power do not exist today. However, they may become available in the future. There are reports that hackers have been collecting encrypted data with the hope that, in the future, they will be able to decrypt it using quantum computers and make monetary and political gains out of it. From the above discussion, it is clear that symmetric key cryptography will be secure even when quantum computers with thousands of qubits become available. However, new protocols shall be required to securely distribute shared keys since the current PKC-based shared key establishment mechanism will not withstand quantum computers.
Currently, two types of techniques are in development for secure key distribution. The first type of technique depends on computational problems that are difficult even for quantum computers and are called post-quantum cryptography. The second type of technique depends on the laws of quantum physics and is called Quantum key distribution.

Quantum key distribution (QKD) methods allow the secure exchange of shared keys between two participants over an insecure channel. Laws of physics (characteristics of quantum mechanics) guarantee the security of key distribution, so an increase in computing power cannot break this security.
In QKD, the information that needs to be exchanged is encoded as quantum states of light. Following Quantum physics concepts form the basis of the security of QKD:
1. Heisenberg’s uncertainty principle implies that the act of measuring an unknown quantum state modifies the state. So, if an eavesdropper measures the data(qubit) during transmission, the value of the data(qubit) will change.
2. It is physically impossible to make a perfect copy of an unknown quantum state, so an eavesdropper can’t copy a bit stream and measure it later.
3. Properties of quantum entanglement limit the information that third parties may obtain. 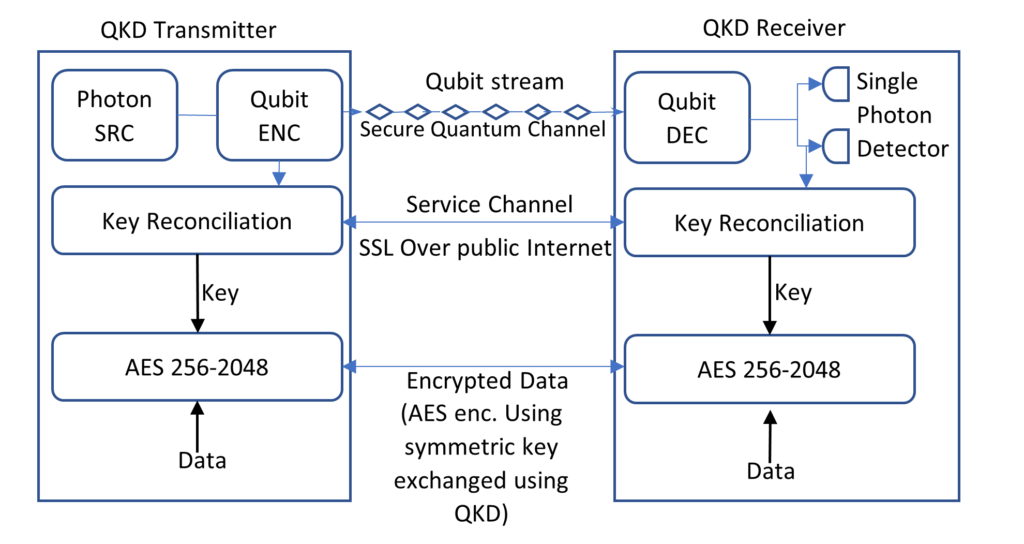 Post Quantum Cryptography (PQC) algorithms consist of mathematical problems that are considered difficult for conventional computers, as well as for quantum computers. Some of the methods that fall under PQC methods are code-based cryptography, Multivariate based cryptography, and Lattice-based cryptography. In 2016 NIST launched the Post Quantum Cryptography project, which aims to standardize a few Quantum resistant cryptography systems. In 2016 NIST floated a request for submission for PQC algorithms. The evaluation process for PQC started with 69 algorithms. After round 3 of evaluation in July 2020, NIST has narrowed it down to four key exchange algorithms and three digital signature algorithms. On July 5, 2022, NIST declared that they have selected the CRYSTALS-Kyber KEM algorithm and 3 digital signature algorithms for standardization. These OQS implementations can help in prototyping Quantum resistant cryptography.

HSC is currently working on projects where PQC algorithms are being used to safeguard VPN and E-Mail products. Our team has also worked on the implementation of the QKD post-processing algorithm. If you are interested in this technology and its applications then let us connect!